I am a serious foodie and the moment I knew that I would be visiting Mexico city for a second time, I made sure to make a reservation at Pujol. As long as you do a little bit of advance planning, you should not have any troubles finding a table. My reservation was made four weeks ahead of time. Upon arrival, our table was not ready yet and we were invited to wait in the lounge where a few servers came to serve us with water shortly after.

The Pujol restaurant in Mexico City currently has two menu options. The Omasake Tacos along with the tasting menu. I decided to go with the tasting menu since I hard a hard time with the idea of paying so much money for tacos, although they seemed to be quite elaborate work of art.  You know! This is just basic math. Having said that… if anyone from Pujol would love to sponsor a Round 2… I will be right here waiting.

Super excited to find myself in this beautiful place, I could not wait to begin the adventure. After about 10 minutes, we were escorted to our table where the menu was already waiting for us.

These are the two drinks I’ve sampled. The first one to the left was a Michelada ( beer, lime, spices) and the second one was a Mezcal based drink. This one took some time getting used to since I find that Mezcal tends to overpower anything that it is mixed with. Once I got accustomed to it, it grew on me. I especially loved the sour and sweet strong taste.

The first things that were brought to the table were the street snacks. Some baby corn dipped into a type of mayonnaise.  The second I heard “mayonnaise”, I started grimacing. I am not a picky eater but mayonnaise is one thing I do not like. But of course, I gave it a try. One does not go to a top 20 restaurant to snob the chef! To my surprise, it was really good. The baby corns were really smoky and not too salty. So I found that the mayonnaise actually balanced the smoky taste. At the end, it blended perfectly.

The little side dish tasted a little bit like tacos to me. Although, it was really savory and not too overpowering. I found myself patting my back for not having went with the taco menu instead.  Just saying! But seriously though, it was good and just the right amount of tacos flair!

I will be really honest with you. This right here is the one reason why I wanted to eat at Pujol. I am obsessed with sea food and after seeing that picture somewhere, I just could not remove it from my head. I am glad to say that it totally lived up to my expectations.

The octopus was spicy but not too much. and the leaves helped balance it furthermore. It was served with a mash made of local beans. I thought this was a great twist compared to the usual mash potato. One last thing I want to say is that I was still surprised with this dish. Having eaten my fair share of octopus, I expected it to be a bit chewy. However, I do not know how the chef did it but the octopus was buttery smooth. It’s unlike anything I’ve eaten before. Days later and I still left pondering how it was so soft. 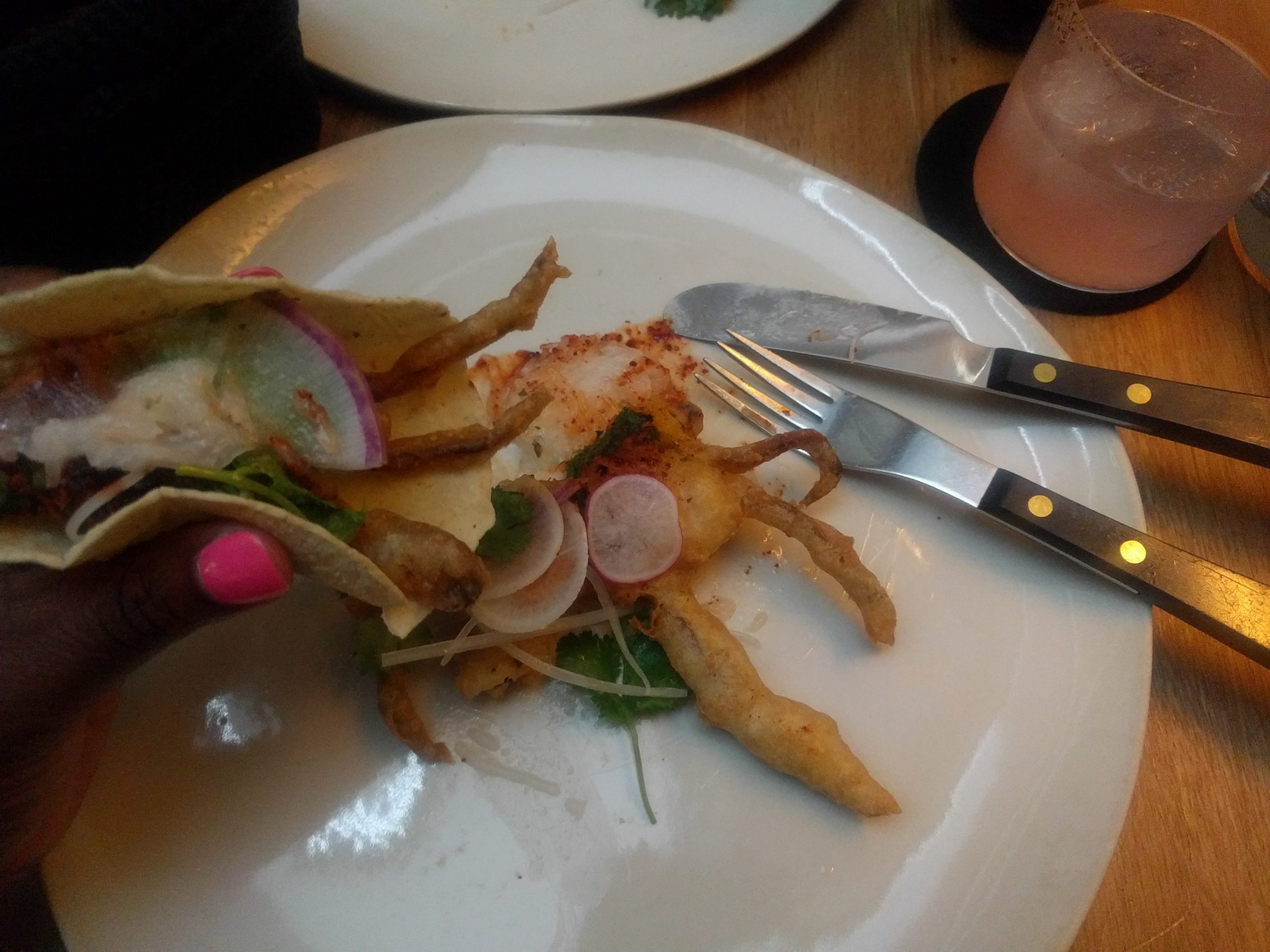 I was determined to overdose on seafood, so of course, I went with no other but the soft shell crab. It was served with tortillas and we were advised to make tacos out of them. Our DIY tortillas turned out surprisingly good, crunchy and perfectly seasoned. However, because I was worried about not making it to the end, I ended up eating the rest without the tortillas. They were a bit hard to swallow without the bread, which I guess shows that they were really designed to be converted into tacos.

This duck was honestly the best I’ve ever had. It was cooked to perfection, resembling a medium rare steak. I was not a fan of the yellow sauce because it was too sweet and tangy. I really loved the ixil onions. They were crunchy and perfectly seasoned. I ended up eating my duck with the green mint mole below and found that they were better paired together.

I am so lucky I got to taste their lamb as it is one of their specialty. This was the softest most tender lamb I’ve had to date. It literally melted in my mouth. The only thing I found was that it lacked a tiny bit of salt. However, I am aware that I eat much more salt then your average person. Besides, it think this was done on purpose because as I ate it with the onions and dipped it into the mint mole, the taste was perfectly harmonious. 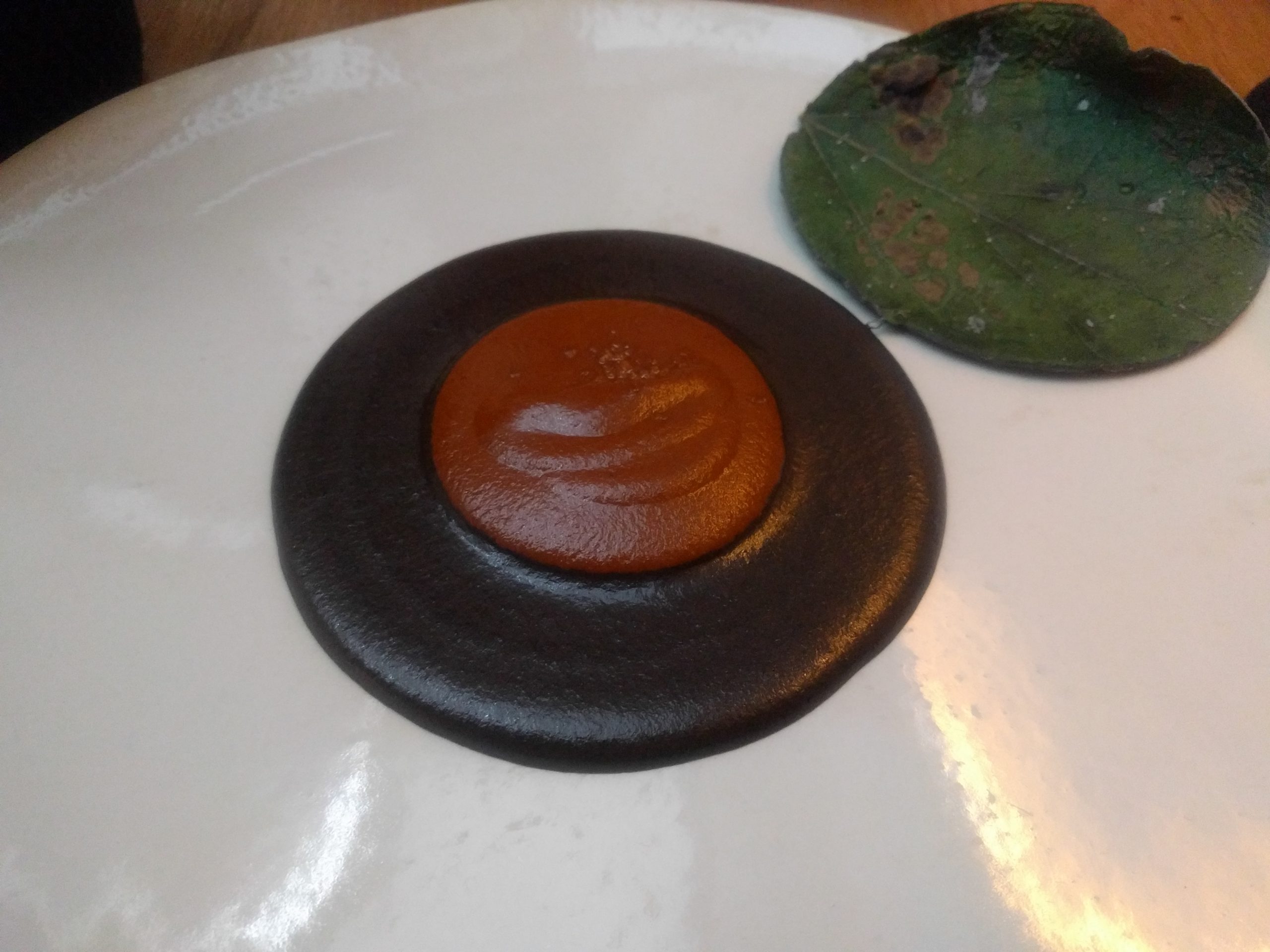 One cannot spend long in Mexico without hearing about Mole. The first thing you’ll ask is ” What the hell is this mole thing?”.  Do not despair as I could write a whole post just about mole its. It is quite serious in Mexico. To be honest, after two trips in Mexico city, I am still just as puzzled as ever. I hope to finally get it right on my third trip and this time I’d like to go do my research right at the source, in Oaxaca sate as it is says to be where this national dish originated.

For now let’s just say that mole is a very serious dish that takes ridiculous amount of time to prepare .  So this was no surprise to see that the Mole was Chef Olvera’s little baby. They take it to the next level though. The Mole Madre was aged, in other words, cooked for 1570 days. All I can say is that it shows. The deep brown mole was extremely nutty and smoky. I was quite excited to see what the fuss was all about. Blame the long Canadian winter for stripping me off of my smokiness but I am afraid to say I did not like the brown Mole Madre at all.

To think about it now, I believe it is definitely an acquired taste and unfortunately, I was not going to spend nearly enough time in la ciudad to get accustomed to the mother of all moles. However, rejoice! Not all is lost amigos and amigas, it is with great honor that I would like to announce that I really liked the reddish Mole Nuevo. Unlike the brownish mole, it was cooked on the same day and did not have the smoky taste at all. Instead it was slightly sweet.

Please bare in mind that this is a dish on its own and it is only served with the special leaf covered black tortilla. Once I dipped it into the reddish concoction, I was finally content.

I guess you cannot have fine dining without a pre-desert palette cleaner !? Honestly, this could have been a desert by itself if you ask me. I enjoyed it a little bit too much. It tasted like a gelato-slushie concoction. The best thing was that it was tamarind based. Simply delicious! 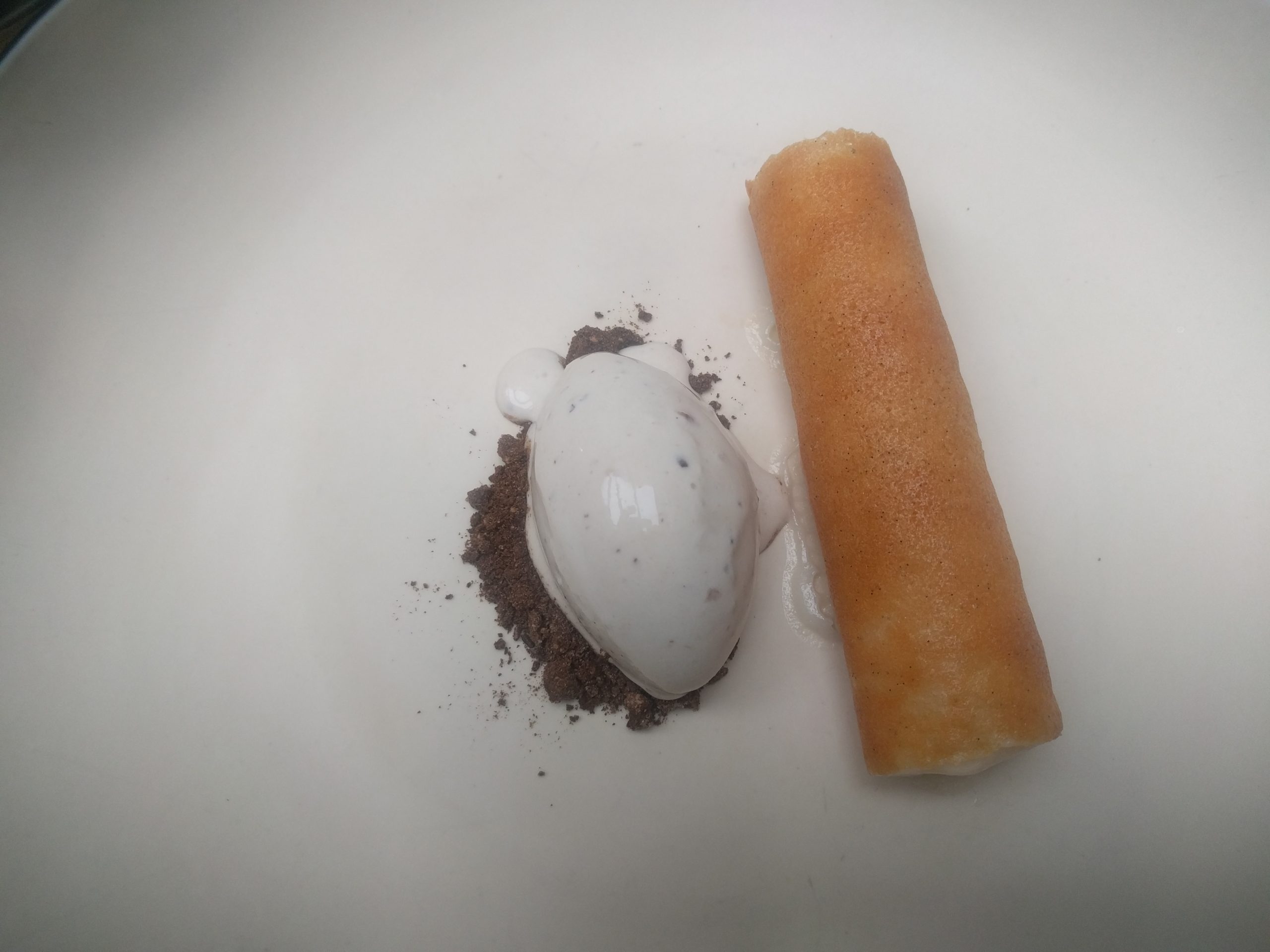 I am a self proclaimed  ice cream lover. The second the waiter explained the menu to me, I was sold. This is hands down the best desert I’ve ever had in my life. Point blank period. I don’t even know where to begin describing it. I’m afraid this is beyond my pedigree. Let me try though. The crepe was really thin and crunchy and had a type of cheesy filling inside of it. The ice cream itself was pretty much sent from the Aztecs and Mayan gods. I could feel myself getting slightly inebriated as I devoured it and I almost cried when it was over. I will end with this: the desert chef deserves a raise and his/her own pastry shop along with his/her own cookbook, if not already, ASAP  !!!! Anyways, you get my point!

In all honesty, I have no idea what this was. In contrast to the amazing desert I’ve just had, this was just OK. I cannot really complain as it was not part of the menu and was sent to the table as a celebratory act. I felt like the decoration spoke louder than the actual taste. Still, the gesture was really appreciated.

Right after we asked for the check, the churros came along. What a brilliant way to cushion the salty bill 🙂 ! Food in Mexico city is extremely cheap. Pujol is quite a contrast and definitely leveling with international restaurants and prices. Although I was definitely full from all that amazing food, I still made sure to savor the churros. It was cooked right, not too oily and with the perfect amount of sugar.

After paying the bill, I asked if I could visit the kitchen. It was surprisingly quiet. Also, doesn’t the window makes it feel like some sort of enchanted world? 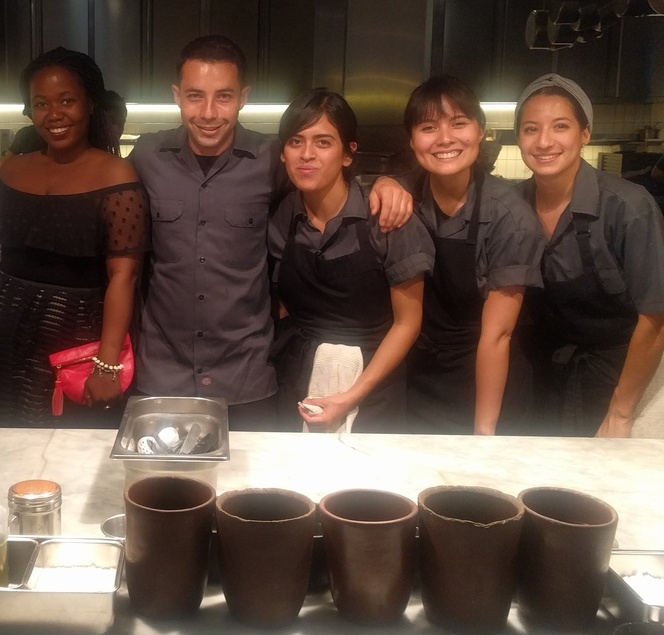 Overall, the experience at Pujol was quite unforgettable and one that I would look forward to repeating next time I am in Mexico city. I would go back for the mighty Octopus, the Mole Nuevo and the Lamb… and of course, the desert! Besides the food, I really loved the earthy peaceful decor and vibe that was all over the place.

The staff is extremely kind and makes you feel special. One thing to note though is that they take their time to explain the food, explain and answer all potential questions to the best of their abilities. However, once the food is serve, the waiters do not check in to ask you if everything is good. This worked fine for me as it can be a little bit annoying when I am consistently interrupted while savoring my food. I still wanted to mention it as some people might interpret it as a lack of attention.

The whole eating experience took about 3 hours. The food was clear and concise but still very innovative and elaborate. You could clearly distinguish the main ingredients. Once again, I know this is important to some. I like that Mexican cuisine and flair was  honored throughout the meal, from appetizers all the way to desert.

This is definitely an authentic experience and a great way to wrap up a short trip in Mexico city.