Ranking: # 31 of The World’s 50 Best Restaurants in Latin America

Nicos was one of the restaurants that was recommended to us under the promise that it would be as authentic “Mexicano” as possible. Being the self proclaimed foodie that I am , I definitely did not think I could afford to pass on such a great experience. Because I have heard of how busy they can be and simply because I tend to be a little bit of a maniac when it comes to planning, I made sure to make a reservation the second I knew I would be visiting Mexico city, about two weeks ahead of time.

To be honest, you don’t need to reserve that much ahead as the restaurant was not necessarily packed when we were there. The online reservation process was very easy and straight forward. In case you’re just as crazy as me and have decided to blow all your budget on food, it is the same reservation  system as Pujol, ( Trust me! You don’t want to skip that one ) . The only thing is that they do place a hold of about 200 USD on your credit card in order to secure your reservation and as a penalty in case of a no-show. I mean that’s fair game, I don’t think any of my readers would ever commit such a crime anyway, right? Exactly!

So what’s the fuss about ?

Nicos is more of a family style restaurant that focuses on authentic Mexican dishes. I still found them quite innovative, however, the dishes are very simple in the sense that you can clearly identify the major ingredients used throughout the dishes.  The atmosphere is very relaxed and non pretentious. It is all about the food. Now let me show you what I’ve sampled there .

I took a recommended secure taxi to Nicos ( Always take secure taxis while in Mexico city. No do not just randomly hail a taxi like you would do in New York city) . Although this establishment is supposed to be well known, our taxi driver still had a bit of a hard time finding the exact location. That’s’ because it is rather on the other side of town .

The place felt relatively safe but it’s just not really located in a touristy area. Think industrial meets residential type of neighbourhood. After wandering around for a bit of time  and having the taxi stop more than three times to ask for directions, we finally arrived there and the people at Nicos were very welcoming. By that point, , I was starving so we quickly perused their extensive menu.

With so many options to choose from, the waiters were really nice and patient with my extremely rusty Spanish. As it is often the case with authentic restaurant, none of the waiters I encountered spoke English, which is another reason why I really liked it. .  I simply loved the fact that it was not catered to the usual tourist like most places often do.

But if your spanish happens to be even worst than mine, don’t you worry my amigos y amigas! No only is food a universal language but you simply just can’t go wrong with their menu. 🙂

As we were getting down to business, the first order was for some mezcal based drinks and guacamole. They also brought some really warm complimentary tortillas in the cutest indigenous pouch and a bottle of water. I am obsessed with Guac and yes, I will say that this was THE BEST guacamole I’ve had in Mexico city.

They are actually quite well-known for their mezcal . The waiters along with quite a few online sources say they have one of the best selections in the country. Unfortunately, I will not be able to vouch much for that as I did not sample their mezcal in a pure form but only via a cocktail . Still, mezcal is really overpowering and you pretty much taste it throughout the drink. Although this is a matter of personal taste and is highly subjective, I believe that it is somewhat of an acquired taste and let’s just say that it is not a favourite yet.

There were so many intriguing options on the menu but we decided to go with the “ Dry soup” as appetizer  I immediately thought it was an inside joke and that the chef was having the time of his life laughing at how incredulously naive foodies could be. Not cool chef, not cool! Dry soup? Really? Well I shut up and still decided to give it a go. When I asked the waiter how can a soup be dry since the basic concept of a soup means that it is liquid, her attempt at an answer left me even more perplexed. She told me it’s one of these things you just have to try. Let’s just rest the case and call it an oxymoron.

True facts: the dry soup looks exactly like a lasagna  Having said that, the second you put it into your mouth, the filling between the pasta kind of melts by itself. Thus making it a “dry soup”!  To sum it up, it was quite tasty and towards the ends, I renamed it “Extra Juicy Lasagna”… Sorry Chef! 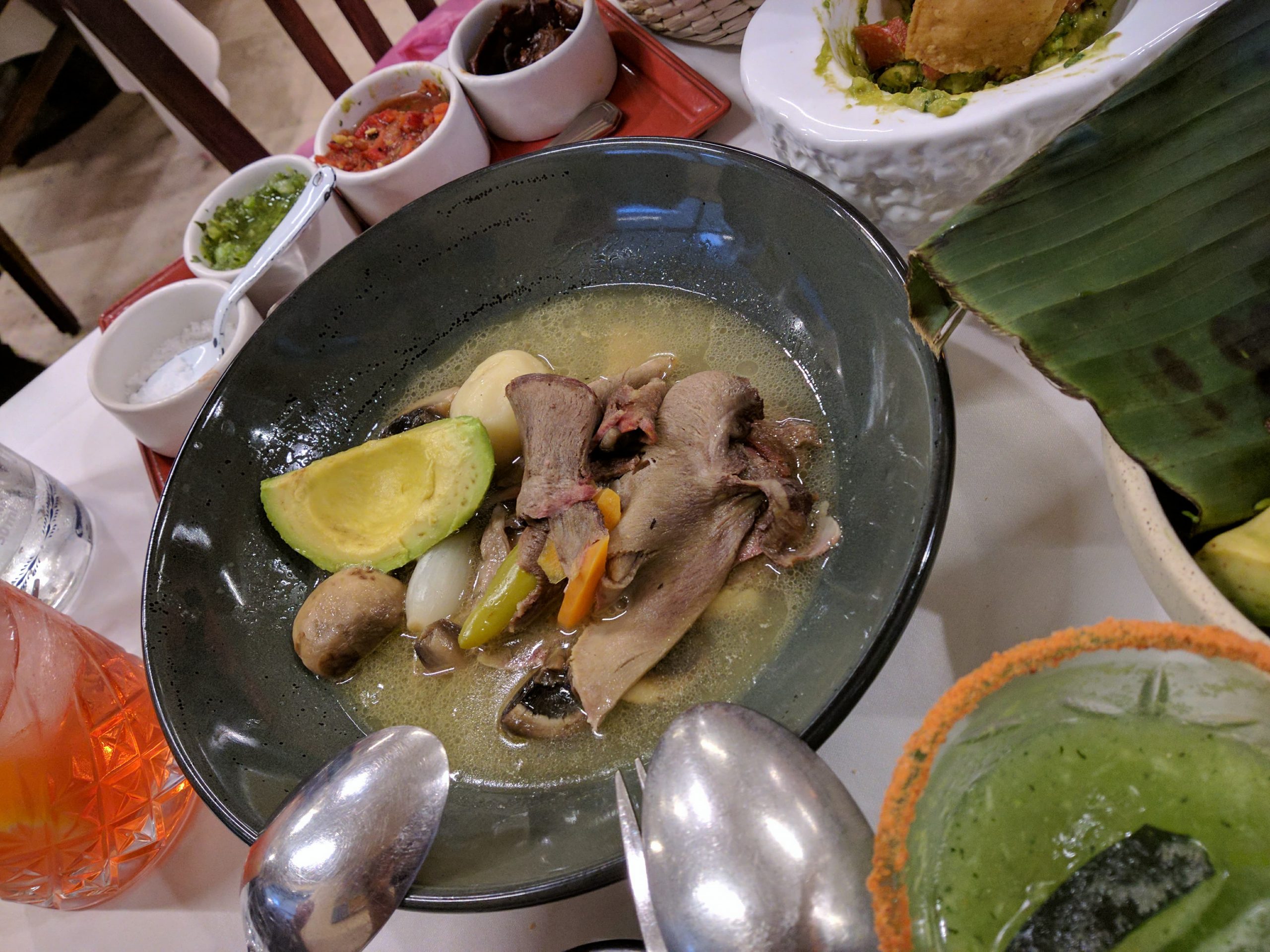 One of the Juiciest Stew on planet earth

The second main was the Lamb pot which has been cooked for 12 hrs, miam miam , music to my ears! I was first a bit surprised when they brought my meal. For some reasons the second I see Lamb on a menu, I automatically equate it to lamb shank but this one was probably more of a lamb leg. Because of that, I thought it would be a bit dry. I could not be more wrong, this meat was the most tender one I’ve ever had in my life. Once again, the spices were perfectly on point. Although, I am a fan of spicy food, it was not, I am guessing in an attempt to adapt to everyone’s palette. Yet I still loved it.

Both meals were simply excellent and next time I find myself in Mexico city, Nicos will definitely be a repeat offender. The price was quite affordable and the welcoming down to earth atmosphere was a delight. There was so much food that we ended up packing the rest for take-out and they made a perfect breakfast the next morning.

Please note that the mains do not come with any side dish such as rice or anything of that sort. However, the meat and pretty much everything else is always served with unlimited fresh tortillas.  Carbs nevertheless, which explains why I could not finish my meal. Having said that, unfortunately, I could not make it to desert either. Towards the end, I sat back, relaxed and watched one of the waiter put up a show for another patron.

In sum, dining at Nicos was such a pleasant relaxed experience comprising of amazing food within a lovely and warm atmosphere. This place has become one of my favorites in Mexico city. If you decide to visit, you definitely won’t be surprised.

8 Awesome Free Things To Do in Sofia, Bulgaria