Agua & Sal Cebicheria is definitely not to be missed on your next trip to Mexico city. Let me reiterate: If you are a sea food lover just like yours truly, you absolutely need to do yourself a favour and book a table there. On that note, let me backtrack a bit and tell you about my visit at this fine restaurant.

So this article is a long time coming but I could no longer go on living without proclaiming my love for that place. After a second visit, spending a week long in Mexico city, hitting most of the major must-eats, I actually came really close to skipping it. I was tired after a long day of sightseeing and toyed with the idea of just doing take-outs. Well I’m glad to say that I did not give up. I dragged myself to the posh chic district of Polanco and was glad to see that the vibe of the restaurant was very low key and laid back. Please bare in mind that this might have had to do with the fact that it was one of the last seating of the restaurant.

guacamole based sauce and a spicy aioli sauce  with Caipirinha cocktails)

The decor was very modern and contemporary but It was quite dark inside of the dining room. This was perfect for me at the moment so I did not mind it one bit. The waiters were all very friendly and quickly brought us some toasted tortillas along with the usual Mexican dressings that most restaurants seem to bring right away. Because I am a  cocktail aficionado, I would like to give a special shout out to the caipirinhas. I am obsessed with them and this one was one the best I’ve had so far. They got it just right, very strong and just enough sweetness. Mileage might very though as I always ask them to ramp up the sweetness. 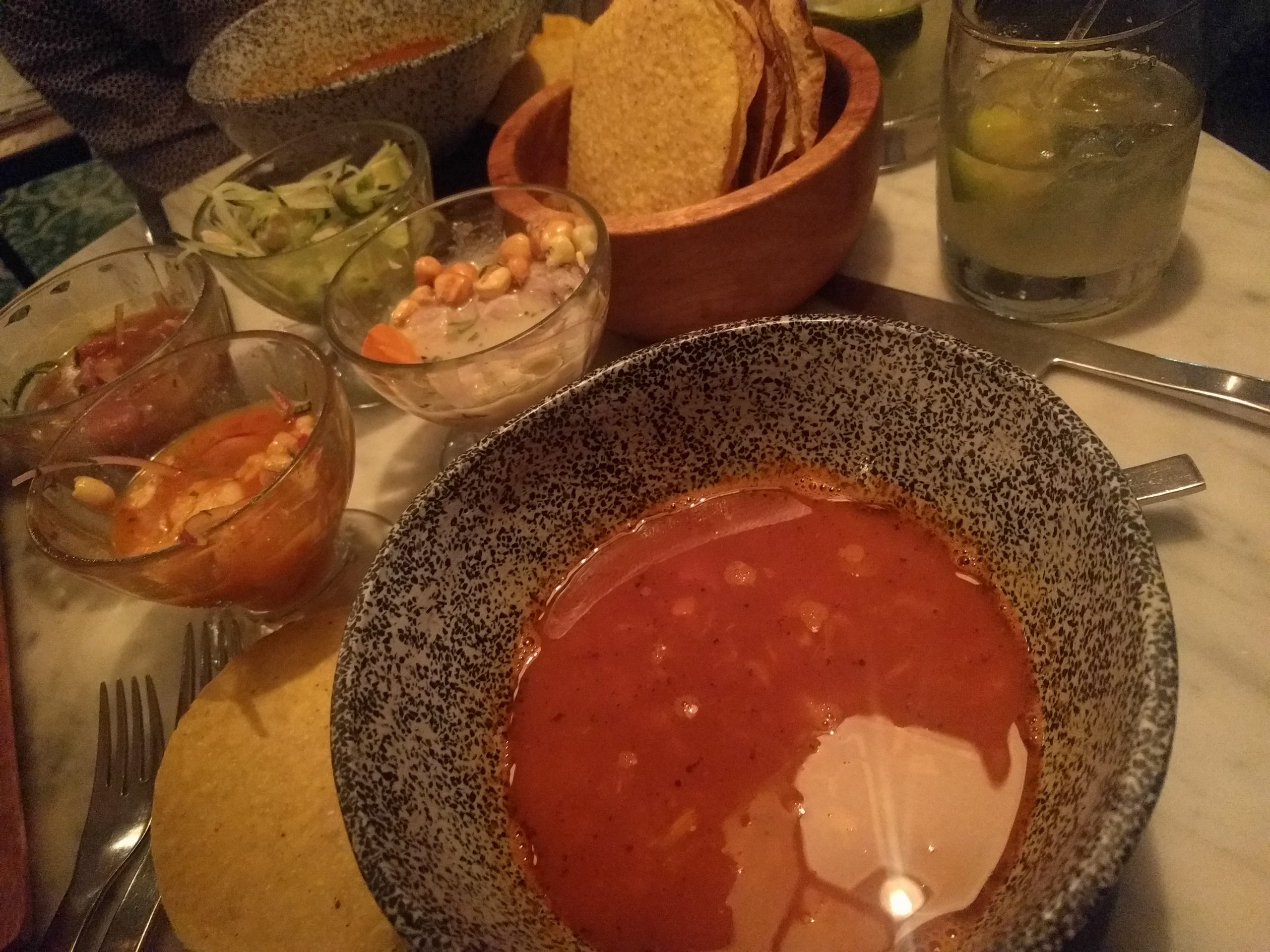 Sometimes it is the little things that make the difference. I quickly noticed how this was the first time that I was getting toasted tortillas in Mexico city. Usually they are always served warm, but never toasted. This was a nice change which, I must say, went really well with the soup that we’ve ordered as appetizer…

Now let’s talk about the soup. This is hands down one of the best one I’ve had in my life and went straight into my soups hall of fame. It was a crab soup, where the crab meat mostly hung at the bottom of the bowl. And although in the picture, it might come off a little bit oily, I did not find this to be the case. What stood out for me is that it had the perfect balance between spiciness and that light citrus taste for a perfect kick. 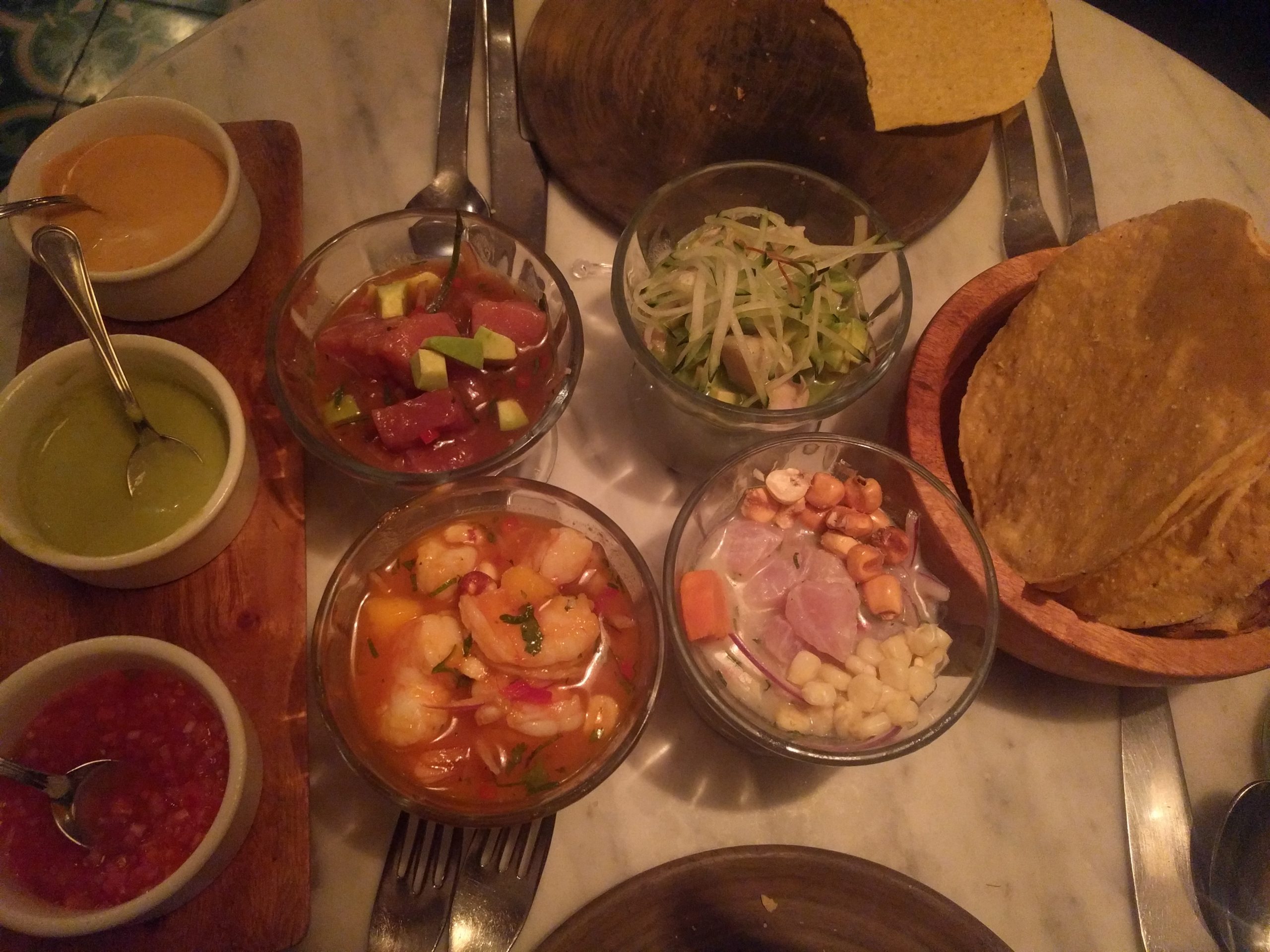 The ceviches are the main reasons why I booked this restaurant to begin with. And after all, it is called a cebicheria for a reason! As a result, I was not surprised to find out that I could not make up my mind. The ceviche menu was quite extensive. What’s a girl to do? Seafood is just my weakness.

So the “degustacion” plate came to the rescue. I found that it was a perfect opportunity to sample a variety of their ceviches without committing to any particular one. Turned out to be a brilliant idea. This Combo was pretty much made up of a salmon based ceviche, a Shrimp one, a green salad ceviche with the last one being some sort of tuna fish. I want to say right away that I was very pleasantly surprised with all four of them.

Initially when they brought them to the table, I thought I would only like the shrimp one since I am very heavily biased towards shrimps and don’t usually like raw salmon and tuna. Well, your girl was in for a ride. The chef made sure to spice things up by giving them each a different flavour. Turned out that my favourite was the “Peruano Y Verde”, the green looking one. It was loaded with onions and avocado with a good citrus base.

The salmon was very good too. I remember it was slightly sweet. Moreover the shrimp did not disappoint. The chef surprised me since he included mango bites in it. They were all amazing but if I absolutely had to pick a least favourite one, it would have to be the “Atun”.

Nothing personal Chef! Like I said, I’m just not a big tuna fan. Sometime, it just is what it is! 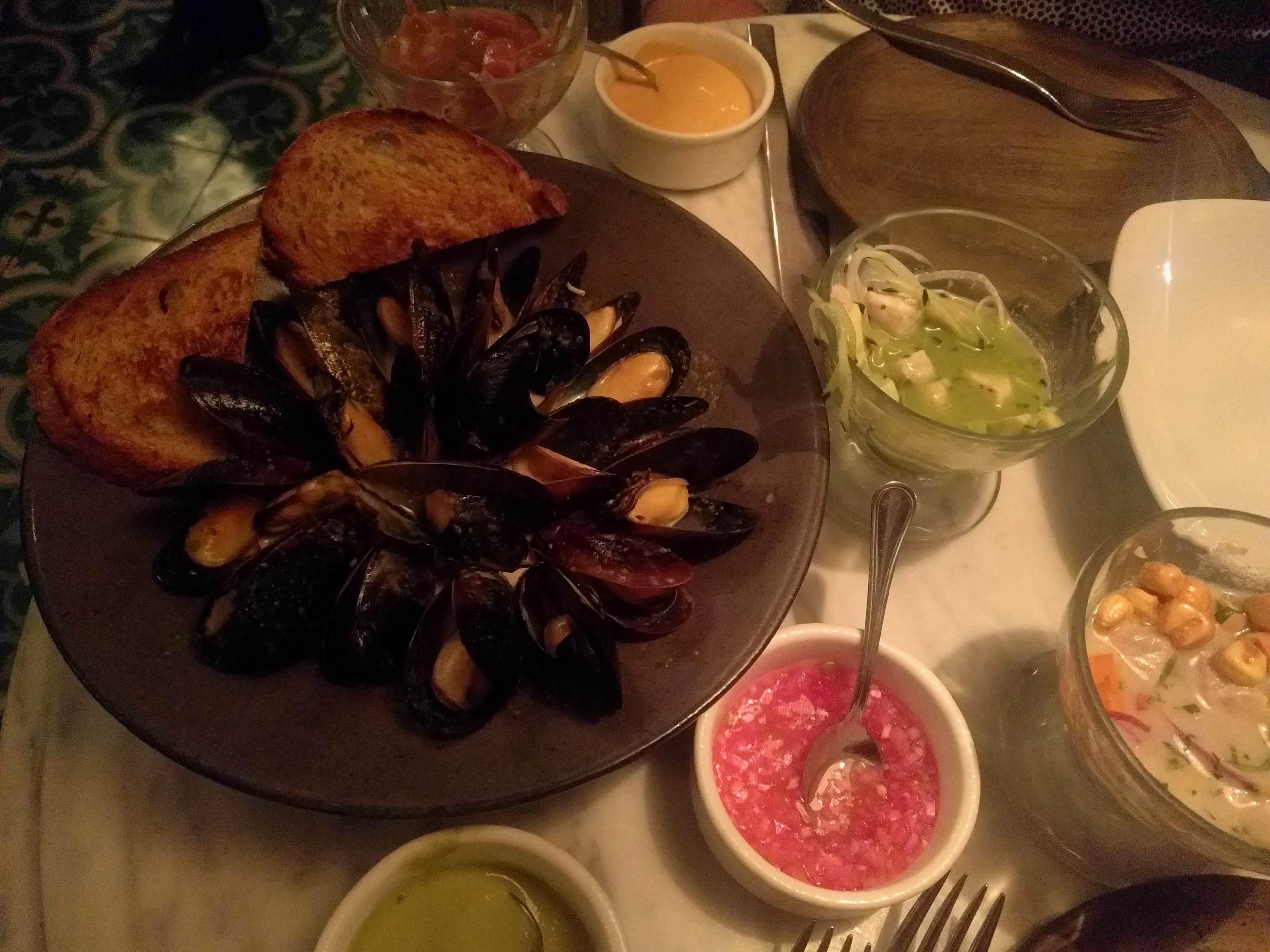 The waiter then brought up the next plate and he could not stop laughing when he read the look on my face. I was defeated! This was my wildest food dreams becoming a reality and I felt like I was in seafood paradise. Nevertheless, I was fully sated. Although, we took it easy on the carbs, these plates were extremely filling. But there was a problem, we’ve already placed the orders at the beginning not expecting to loose the battle so soon, so the kitchen was going to keep sending more our way. There was only one option left.

If there is one thing about me is that I never EVER waste food, so unanimously, we decided to wrap everything up for take out. The waiter shook his head, in full compliance with our wise decision.

Not so fast though!

Before taking my food away, I absolutely had to taste it fresh. I mean, how else would I be able to tell you, my lovely readers, about it? So, my mouth still watering, I quickly tasted one warm inviting mussels. I kid you not, this was the most amazing thing ever. It was buttery soft and until today I still remember dipping the bread into the sauce and oh my! I’m afraid I do not possessed the words to describe how amazing the mussels and its sauce were. The chef thoroughly surprised us dish after dish and I could not stop thinking what a pleasant discovery the evening at the restaurant was.

Remember, at the beginning I wrote that the ceviches were the reason why I booked a table at the cebicheria?

Well turned out that by the end of the night, I would have another reason to come back: The Paella. To be fair, this part of the review is a little bit embarrassing. What happened is after tasting the mussels, the waiter wrapped everything up for take out… Along with the paella. At that point, we were way too full and did not even let him bring the paella to the table. We decided to keep if for a pleasant surprise for later.

You also now have no other option but to take my words at face value and trust me when I tell you that the paella made for amazing leftovers. The whole time I could not stop thinking about what it would have actually tasted fresh. Even while having it the next day, my mind was going crazy thinking that this was just the best paella of my life,   I now have one more reason to go back to Mexico city.

The cebicheria will definitely be extremely high on my repeat offenders list. Next time, I will make sure to go during daytime so that I can try a different atmosphere and also take brighter pictures. And please, If you ever find yourself in the district and you love seafood, do yourself a favour and do not hesitate to book. You will be pleasantly surprised 🙂

Cheers to All my Seafood Lovers! 🙂

Everything You Need to Know About Kathmandu Garden of Dreams